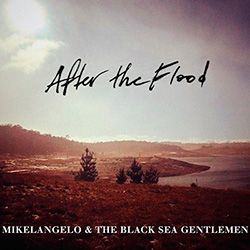 MBSG005 Released 2016
AFTER THE FLOOD features 14 new songs inspired by tall and true tales of the highlife and the lowlife of the European working men on the epic Snowy Mountains Hydro Scheme in the 1950s and 60s. The band delve deep into this wild chapter of history, armed with vivid imaginations and a veritable arsenal of instrumentation, sharing their own unique and compelling take on the making of modern Australia. Recorded and mixed by Evan McHugh at Turning studios in Sydney. Produced by Evan McHugh with Rufino, Muldavio and Mikelangelo. Landscape photography by Rose Ricketson, band portraits by Andrew Watson at Semi Conductor Media, artwork and layout by the Killart Foundation; the Australia Council for the Arts funded the recording of the album. MBSG004 Released 2015
THE ALPINE WAY is a limited edition EP, only available by mail order or at live shows. The songs were recorded as part of the After The Flood sessions, and released as a thank you to the people of Cooma, the Snowy Mountains and the Monaro Plains who opened their homes and their hearts to the Gentlemen during Project Cosmopolitana and the writing of the album. The Alpine Way features two non-album tracks, Such Tales and Dirty Victor the Bullrider, as well as album tracks Way Down Below and Handsome and Highwired, and was made with the same creative team behind After The Flood; the Australia Council for the Arts funded the recording of the EP. MBSG003 Released 2009
DEAD MEN TELL A THOUSAND TALES was recorded in Tasmania with Kimmo Vennonen at Mikelangelo’s sprawling seaside villa at the mouth of the great Southern ocean. A debunking of the old myth that dead men tell no tales, Mikelangelo wrote this collection of thoroughly entertaining songs about the fate that awaits us all. The first album to be recorded with their long time bass man Little Ivan, and heralding the arrival of the otherworldly vocal stylings of Guido Libido; this was the first album to see the group as a five piece line up. the album also features Rufino’s The Struggle To Be Human; and live favourites The Devil’s Wedding, Skeletons and Ten Long Years in the Saddle. Album artwork by Geoff Hinchcliffe; photos by Rich Morrod. Produced by Mikelangelo, Muldavio and Rufino. Recording was funded in part by The Australia Council for the Arts

Journey Through The Land of Shadows 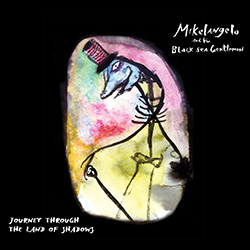 MBSG002 Released 2005
JOURNEY THROUGH THE LAND OF SHADOWS is seen by many as the ‘must have’ Black Sea Gentlemen album, including Mikelangelo classics such as The Wandering Song, One Of Those Am Days and of course, the irrepressible, A Formidable Marinade, which has spawned an incredible amount of cover versions over the years. The album also features The Great Muldavio’s riveting tale of how he came by his name, and Rufino in full flight with the PBC orchestra singing Things Will Never Be The Same. This is the first album to feature Rufino playing violin in the band; the last album for original bass player, the Baron von Babyface; and heralds the arrival of Guido as a special guest on piano accordion. Recorded at the Wesley Uniting Church in Canberra by Kimmo Vennonen, who also mixed the recordings. Produced by Muldavio and Mikelangelo. Original artwork by Mikelangelo MBSG001 Released 2001
MIKELANGELO AND THE BLACK SEA GENTLEMEN recorded their debut self-titled album in the warm and welcoming home of Mikelangelo’s mother and father in a quiet cul de sac in Frankston, an auspicious start for the group! Literally banishing Mikelangelo’s parents the opposite end of the house, the band set in for two days of live recording in the large living room, with wooden vaulted ceiling and studio set up provided by Matt Hills, who recorded and mixed the album with virtually no overdubs. Artwork is by Mikelangelo. This was the original line-up, featuring Mikelangelo on vocals, guitar and accordion; Muldavio on clarinet and jaw harp; Baron von Babyface on Contrabass; and the dearly departed Senor Handsome on violin. The Senor left this mortal coil a mere 7 weeks after recording the album, leaving his spirit forever with the Gentlemen as their phantom sixth member.

Sign up here!
for your monthly message in a bottle